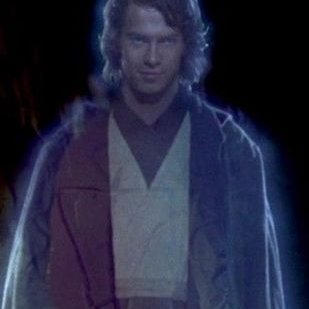 And now, a breaking news story… we join Treasa Leigh   in the studio for this exclusive interview.

I smooth my skirt just as the holo vid guy turns the equipment to face me. I look into the little red light and lick my lips. I was going live in seconds.

”Gentle Beings, I recently had the pleasure of interviewing one of the most wanted men in the galaxy. What you are going to see here is strange, and to some, maybe even a little unbelievable. It will help you understand one of the universe’s most complex beings. I present to you an uncut, unedited version of my interview with none other than… Anakin Skywalker… or, to others, he is simply known as Darth Vader.”

“Here I was, going to meet the man most of the Galaxy has voted as the most well-known villain and to say I was a little worried was an understatement. After all I was just a humble fan fiction writer, and he was the Sith Lord that had helped wipe out almost the entire Jedi Order.

“I shouldn’t have been surprised at where he wanted to meet me for the interview. From everything I knew about him, the happiest time in his life was when he was a slave in Watto’s junkyard, where he could repair mechanical devices.

When I walked into the waiting area, I saw droid parts, spanners, and tools all over the wall and in the middle of the room I saw a figure with his back to me. He was surrounded by a blue halo and longish shaggy blond hair.

When he turned to face me, I immediately swallowed. He looks… well normal. Well not normal, but like he did before he became Vader. I could see that in remaking himself in the Force he was a complete human once more.

I crossed the room and offered my hand to the man who was once a slave, the Chosen One, husband/father, Sith lord and the Emperor’s assassin.”

“Good afternoon, I’m Reece, also known as Treasa. Thank you for agreeing to this interview.”

Anakin’s voice was smooth and slightly boyish as he greeted me. “Good day, thank you for agreeing to meet here. I’ve always felt more comfortable around them,” the man said with a sweeping gesture toward the droids and pieces of transports lying around.

I nodded looking for a place to sit and was grateful that I had chosen to wear jeans and a pullover sweatshirt.

Anakin saw my hesitation and flushed when he realized I had no place to sit down and be comfortable. With a sweeping motion he pushed aside spare parts and said, “Sorry, milady. I knew I forgot something. You see I don’t get many visitors here.”

I grinned at the term he used for me, after all I have never been referred to as a lady, but I guess he has not forgotten all his Jedi training.

He smirked as he picked up on my thoughts. “No not all of it. Although the Emperor tried hard enough,” Anakin said with a grimace.

That reminded me of the reason I was here. I had a job to do and… to be truthful, I was curious as well, so I started with something simple, “What should I call you? Jedi Skywalker or Lord Vader?

A boyish grin appeared on his face, and I swear there was even a twinkle in those blue eyes. “Anakin is fine for now.”

Reece:  “I notice that you have retained your individuality in the Force so you can choose your appearance, why this one?”

Anakin: “Call it vanity or maybe… This is what I looked like just before I lost everything I cared about. Now every time I look at my reflection, I remember not to be so stubborn. I had a terrible habit of thinking I knew everything. This reminds me that I don’t.”

Reece:  “I noticed that when Obi-Wan faced you on the Death Star you said, ‘When you left, you were the student and now you were the Master.’ Were you a Knight or a Padawan when you left?”

Anakin: *Hesitates for a moment … perhaps lost in thought. * “At that time, we were in the middle of the Clone Wars and every Jedi was a leader in the army. I was the youngest Knight to sit on the Jedi Council. Although, my pride told me that I should have been a Master.

Reece: “You were so innocent, giving and loving when Master Jinn brought you into the Order. What happened that turned you to the dark side?”

Anakin: “Master Yoda was right when he said that my future was clouded. There have been many that said I had to go to the dark side to bring balance to the Force.”

Reece:  “Was Master Jinn right, were you the Chosen One?”

Anakin: *grins* “Yes and no. It’s not that simple. There is never just one person who is the Chosen One. For example, Obi-Wan could also have that title. He trained me in the light. Our fight forced me to accept that I had given myself to the dark side. He saved my son who brought me back to the light. Therefore, he could have brought balance to the Force. No prophecy can be interpreted only one way.”

Reece: *I nod agreeing with his point. * “I have heard rumors that Master Kenobi was cold and unfeeling while he was training you, is that true?”

Anakin: “No, he loved me. Like a father actually.”  *He ran a hand through his shaggy hair. * I loved him the same way. In fact, that was part of my problem. I felt guilty loving him every day when I couldn’t see my mother and loved her just as much. Then when I lost her, I couldn’t … well I felt that I had to save everyone I loved. Obi-Wan didn’t want to be protected at the expense of the dark side. When he noticed the change in me, he became more protective and I pulled farther away, which enabled Palpatine to drive a bigger wedge between us.”

Reece: “Something I’ve always wanted to know. How is it possible that you tortured Leia and had no idea that she was your daughter and one meeting later you knew Luke was your son?”

Anakin: *smirked* “I should have. She had her mother’s personality. But I didn’t torture her. *He laughed at my confused expression* “Leia accused Tarkin of holding my leash. I never did do well with anyone controlling me unless it was what I wanted. As for me knowing about Luke and not Leia… Luke had the Skywalker last name Leia didn’t. When I learned the name of the person who blew up the Death Star it wasn’t hard to figure out.”

Reece: *I nodded. I could see what he meant. * “Would you have really turned your son and your daughter and ruled the universe with them?”

Anakin: “I don’t know. When I offered that to Luke, deep down, I knew he wouldn’t accept it, but I had to try. He was all I had left of Padmé. It was then I began to feel once more. I needed this … these feelings that I had blocked out for over 20 years. And as for killing Palpatine, yes, I would do it again in a heartbeat. He had pitted me against others and even tried to replace me with my son by his side. I was no longer loyal, especially after I realized what he had cost me. It was only my pride that caused me to fight against Luke in the throne room. I couldn’t believe Obi-Wan had taught him so much when I could do nothing for him.”

Reece: “Has everyone forgiven you?”

Anakin: “No, I didn’t expect that they would. As I said before I don’t have many friends but most of them didn’t keep their identity in the Force. Although some of those that did are beginning to come around. Vengeance and holding grudges are not the Jedi way.”

Reece: “Would you go back and change it if you could?”

Anakin: “At the risk of making more people angry… no. Everything happens for a reason even purging the old Order. You cannot heal something if it is not first cleaned. The only thing that I would have changed was the killing of the younglings.”

I looked at my watch and realized that I enjoyed doing the interview. Anakin had answered every question even though I realized I didn’t ask nearly enough about the time he spent as Vader.  “You were both the destruction and the savior of the Jedi. Will you return as another person and try it one more time?”

Anakin’s answers gave me a glimpse into his still tortured soul. I wondered if he would ever find peace regarded so highly by the Jedi. “Thank you, Anakin, for spending the better part of the afternoon with me and answering my questions. I would be honored if you would consider me a friend.”

He bowed from the waist and grinned in a way that I could almost understand Padmé risking everything to find love in the arms of this man. “It was my pleasure, Milady. Come back anytime. Maybe next time you can interview my soul mate.”

I jumped down from the counter where he had cleared a space for me to sit and smiled widely. “Actually, I am scheduled to interview Darth Maul next. Got any suggestions?”

“Wear something comfortable and bring Obi-Wan to cut him in half again,” he said laughing softly as he faded into the Force.

The screen fades to black and we see the writer staring into a small monitor before looking directly into the camera again….

“It seems even the Sith Lord himself has a few stories left to tell. I wonder if he will ever find a way to ease his guilt and be happy.”

The holo vid operator slowly counts me off the air with his fingers. As his pointer finger curls into his hand the red light on the equipment goes out. I take a deep breath knowing what I had was gold. After watching this my producer would continue the stories.  Which meant tomorrow I was going to the Force Prison to meet a Sith.

Let me know what you think. Cancel reply